A growing number of applications are adding robot elements, and robot restaurants are an example.

Eatsa, a SAN francisco-based restaurant, accepts orders through smart tablets and distributes food through automated machines. And in the next month, the robot platform will be expanded to fast-food restaurant chains. 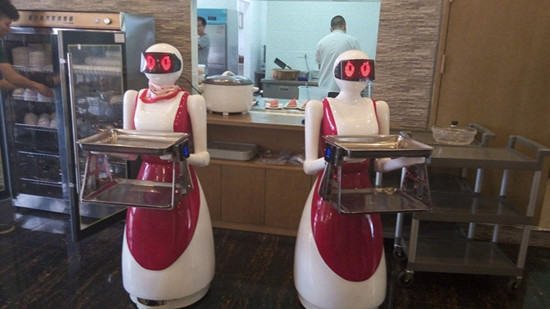 The combination of artificial intelligence, robotics and consumers' reluctance to interact with humans at the point of order makes this transition possible. It's part of a robotic progressive technology that has changed the experience of eating out or dining out, thanks to advances in sensing technology.

Current research and development of the robot, can automatically perform specific tasks, can also develop a plan of action, alone has very extensive experience system, intelligent system, and special simulator, robot robot operation of dining-room also cannot leave the probe, probe the bobbing requires the obliquity sensor to cooperate, to measure the Angle of robot bobbing up and down, and give the corresponding signal control system, and then control system sends signals to other position, ensure consistent.

Development personnel robots will be built to various functions such as external sensors and Angle sensor of sensors together reasonably, form the robot sensitive perception system, for the movement of the robot, provide more reliable information from the outside environment, in order to impel the environmental change of robot for the outside world to make more accurate real-time realistic behavioral response. In this trend, the application of robots will become more and more extensive.